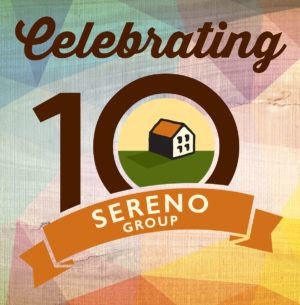 This amazing first half completes Sereno Group’s first decade of being in business. During July Sereno Group will be celebrating its 10 year anniversary. The firm was started in 2006 by Chris Trapani and Ryan Iwanaga and 27 daring agents. These agents were willing to take a risk on a powerful vision to create a firm committed to practicing real estate in a different way.

Sereno Group’s vision has remained “real estate redefined” to this day. The company has trail blazed for the past 10 years. Sereno Group has innovated, stayed ahead of the tech curve, fostered an amazing company culture, and become a community leader and noted philanthropist.

Sereno Group has grown from a small outfit with one office and 27 agents to average over $2.5+ Billion a year in sales volume with 8 offices throughout the Bay Area and over 300 agents. Here are some other highlights from the past ten years:
– Over a 1 million dollars donated to local charities through its 1% for Good program, which formed in late-2012
– Seven straight years recognized as a top 100 places to work in the Bay Area
– Sereno Group has been honored several times as one of the top 50 most philanthropic corporations in the Bay Area
– In 2015 Sereno Group ranked 56th in overall sales volume and sixth in highest average sales price in the REAL Trends 500 report of the nation’s top producing brokerages

“What an amazing ride these past ten years have been. Our success is due to all of the fantastic agents and staff that share in our vision. We look forward to the journey over the next 10 years ahead for Sereno Group,” said Chris Trapani, Founder of Sereno Group. “The fact that we’ve been able to succeed, grow, and thrive in the ultra competitive Silicon Valley real estate market is a testament to Sereno Group’s vision and its wonderful people.”

Open since July 1, 2006, Sereno Group Real Estate has quickly established itself as a market leader by continually attracting top producing agents in the Silicon Valley. During this time, Sereno Group has achieved the highest per agent productivity for residential real estate brokers in the county. In 2015, Sereno Group closed over $2.6 billion in sales with an average sales price of $1.2 million. The company’s 1% for Good charitable movement has donated over $1,000,000 to local charities and community-minded organizations and was recognized as one of the top 50 most philanthropic corporations in the Bay Area. The company, which has been ranked the one of the Best Places to Work in the Bay Area for seven years, now has eight offices located in Palo Alto, Los Altos, Saratoga, Los Gatos, Willow Glen, Santa Cruz, Westside Santa Cruz, and Aptos. The 300+ agents of Sereno Group serve the Santa Clara, San Mateo and Santa Cruz Counties and points beyond. For more information, please visit: www.serenogroup.com

Related Articles
Sereno Continues to Expand its Peninsula Real Estate Reach Sereno, the San Francisco Bay Area’s most productive, locally owned, and led real estate firm, announced on Friday, October 15, 2021, that San Carlos based Dwell Realtors officially became Sereno and will be operating under the Sereno brokerage exclusively. Although the two firms merged earlier this year, the brand transition from Dwell to Sereno has […]
Sereno ranked #1 in Large Companies by Bay Area News Group Top Workplaces 2021 Sereno is honored to be ranked #1 in the prestigious Bay Area Top Workplaces rankings for the Large Company Category. Sereno is part of an exclusive group named to the list each of the 12 years since the Bay Area News Group began recognizing Bay Area companies. The company believes the result is a testament […]
July 10, 2021, Marks the 15 Year Anniversary of Residential Real Estate Brokerage, Sereno Sereno is pleased to acknowledge its 15th year of business as a successful residential real estate brokerage serving Northern California. Started in 2006 by a group of dedicated professionals committed to serving their clients and community in a new way, Sereno has transformed from a single office with 27 founding agents into a still hyper-locally […]