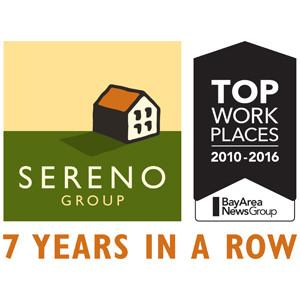 Sereno Group is one of a handful of companies across all industries to be honored every single year since the inception of the award in 2010. Also, Sereno Group stands alone as the only real estate company to be honored seven consecutive years.

“Our team is amazing! Sereno Group is blend of hard working, vibrant, considerate, and thoughtful professionals. The group’s collective energy and graciousness creates a fantastic culture,” said Chris Trapani, Founder of Sereno Group. “We are truly humbled by this continued yearly recognition as one of the Top Workplaces in the Bay Area; this is now for seven years in a row for us. We strive to be an employee-centric organization and this award highlights that commitment.”

Sereno Group was originally recognized in 2010 on the small-size company list (50-150 employees) and has received the recognition on the medium-size company list (151-500 employees) for the past four years. The firm has been ranked either first or second in each category for each of the past seven years. More than 7,000 companies have been nominated since 2010 and the final list of 100 companies comprises a diverse cross section of firms which include high tech and engineering organizations, nonprofits, hotel services, and legal firms, among others.

Open since July 1, 2006, Sereno Group Real Estate has quickly established itself as a market leader by continually attracting top producing agents in the Silicon Valley. During this time, Sereno Group has achieved the highest per agent productivity for residential real estate brokers in the county. In 2015, Sereno Group closed over $2.6 billion in sales with an average sales price of $1.2 million. The company’s 1% for Good charitable movement has donated over $1,000,000 to local charities and community-minded organizations and was recognized as one of the top 50 most philanthropic corporations in the Bay Area. The company, which has been ranked in the top 100 Best Places to Work in the Bay Area for seven years, now has eight offices located in Palo Alto, Los Altos, Saratoga, Los Gatos, Willow Glen, Santa Cruz, Westside Santa Cruz, and Aptos. The 290 agents of Sereno Group serve the Santa Clara, San Mateo and Santa Cruz Counties and points beyond. For more information, please visit: www.serenogroup.com